The Wake Up Call

A UNIQUE BRAND TO HELP SPREAD THE WORD

Changing the game for the greater good

As a paramedic and trauma counsellor, Paul Spinks has helped people at their most vulnerable for years, giving him unique insights into the challenges people face.

This led Paul to his other passion and business, motivational speaking, but his existing brand was being perceived as too new age and self-help, and not motivating bookings. Paul engaged Sin to help elevate his business to the next level and build the Paul Spinks brand.

It was time to change the game.

Time to bring your A-Game

Paul Spinks regularly speaks at seminars and private bookings for companies. His talks focus on changing habits that destroy our mental and physical health, based on his years of experience as a paramedic.

His messages of the spiral of drug abuse, depression and anxiety were being lost because his brand was pitching the wrong positioning. His previous look, as The Wisdom Factory, was too lightweight and new age ‘feelgood’ guru, attracting an audience more interested in finding themselves and not resonating with larger audiences or the corporate sector.

Paul approached Sin to reposition and rebrand his offering, with a goal to break into the lucrative US market as a motivational speaker.

To do that successfully, Sin spent time understanding the unique US market, where bigger is better and speakers are pitched as rockstars with elaborate stage shows.

A completely new approach to the game.

Sin completely reworked Paul’s pitch as “The Game Changer” and his talks as “The Wake Up Call,” positioning him as an expert in the cliff edge of human problems.

We brought in new language and rewrote his entire sales pitch. Two websites were developed, for the Aus and US market, using his Australianism as a feature in the US without resorting to cliched Crocodile Dundee adventurism.

His new brand is hard hitting, using visual cues of paramedic responses to motivate excitement and drama. But we also had to deposition the perception that his talks would be about life and death accidents and shocking car crashes, as 90% of Paul’s actual time as a paramedic is dealing with self inflicted problems, such as drugs, alcohol, depression, abuse and suicide. There are many speakers on the circuit, especially in the USA, who weave tales of heroism and adventures, from soldiers to firefighters, with “listen to my war stories” pitches, but this was not Paul’s talks, and adventure junkies were not his target audience. 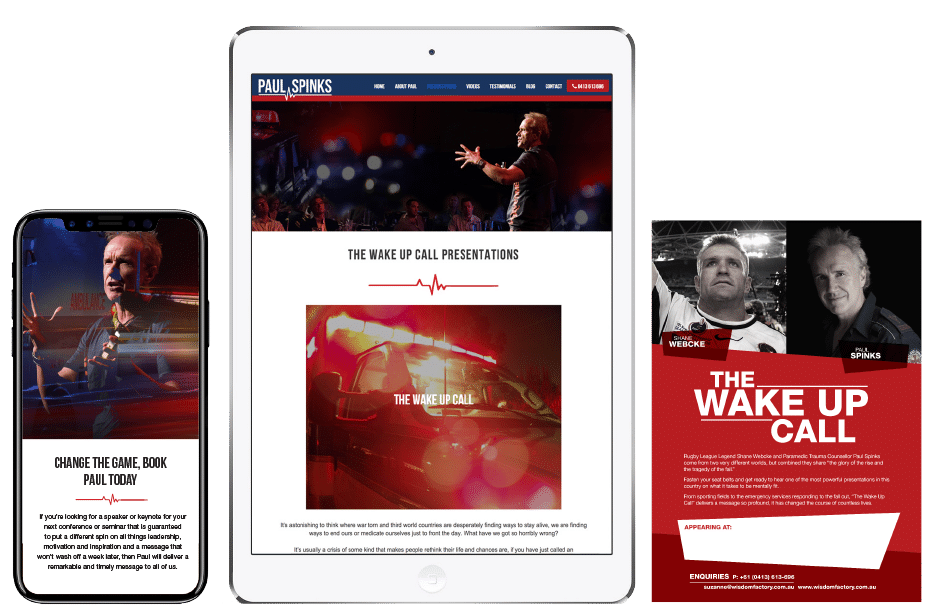 What could we do for you?

A solid design for the experts in tunnel engineering.

A new look and a story of adventure unfold within Quintrex’s latest boating catalogue.